The history of the gyro

The history of the gyro has actually been debated for years. Food historians believe that the gyro actually arrived in Greece in the early 1920’s as refugees from Asia Minor, mainly from Constantinople (now Istanbul) and Smyrna (now Izmir). Many of these people had Greek ancestry, and they brought the tradition of the gyro with them. Some legends indicate, however, that the first gyro handlers in Athens were actually of Armenian decent.

It was fairly common for these refugees to open small shops, mainly in Athens, and that helped increase the food’s popularity. As the people of Athens caught on, the dish started spreading to other areas of Greece. Eventually, Greeks who began leaving Greece for other countries, such s the United States, brought the food with them and the tradition continued in countries such as the United States and Canada. 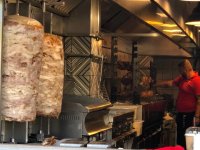 I looove gyro!! So happy I can get it anywhere now a days, thanks for posting about the history
1 - 2 of 2 Posts
You must log in or register to reply here.

Fascinated by Minoan culture and I want to learn more...

Where the name “Greece” comes from

Could the Parthenon marbles be returned to Greece?

The statue of Kolokotronis

The Battle Between The Walls 392 BCE