Who was Horkos in Greek mythology?

Horkos' mother was Eris (goddess of strife) and no one knows who his father is. He is most famously known in the story of Aesop's fables where a man borrows money from someone but has no intention of paying it back. The story best displays the importance of earths in Greek mythology and I'll keeping your word was one of the most important things in the ancient Greek judicial system. Horkos means oath in Greek. 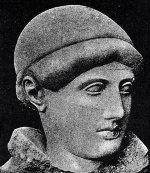 It is amazing to me how many different figures there are in Greek mythology. We know all the main players, and we need to know more about the minor characters that were important but not as well-known. Thanks for sharing this!
1 - 2 of 2 Posts
You must log in or register to reply here.

In your opinion, what is the wildest Greek mythology story?

The classic myth of the golden fleece

Did you know that Greek mythology has a princess of Thessaly?

These are the Argonauts ⚔️

Aion is the Greek god of time