Why is the club sandwich so popular in Greece?

I'm Greek, and one of my favorite things to order at a cafe and on the beach is the club sandwich. By the looks of it, it's probably not Greek....LOL. Does anyone know where it comes from? And we why love it so much? 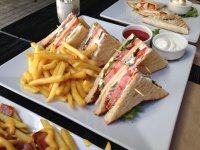 That looks like an amazing sandwich! I think the club-style sandwich is so popular because it has bacon and tomatoes in it! Since tomatoes are so yummy in Greece I can see the sandwich doing well there. This style sandwich is popular in the United States. The origin of that sandwich is under debate, but one of the strongest theories is that it was created in Saratoga Springs, New York in a gambling house known as the Saratoga Club House in the 1890's.
1 - 2 of 2 Posts
You must log in or register to reply here.

What are your favorite lenten recipes?

Why is the club sandwich so popular in Greece?