I love Byzantine architecture and history!

I feel like byzantine architecture and history is the essence of Greece. It's buildings like these that I absolutely love and instantly make me think of Greek culture 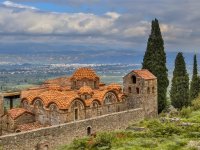 Staff member
It is so true! As a Greek American that has been to Greece many times, I find that it is so easy to take the amazing architecture in Greece for granted...

I totally agree, as well, and we have adopted this style for some of our Greek churches in the United States. It's neat to see the influences!
1 - 3 of 3 Posts
You must log in or register to reply here.

The history of building with stone in Greece

Theodoros Kolokotronis was the leader of Greek independence

How do you celebrate Oxi Day?

The history of the gyro